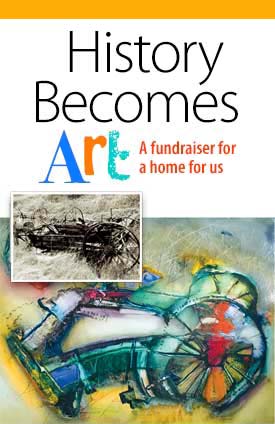 Go to our dedicated site: see the art, learn more, get your ticket!

We are happy to welcome you to our 2nd annual “History Becomes Art” fundraiser  —  an afternoon of wine, food, music  and the opportunity to obtain art that represents the history of our community.

20 artists have created 30+ works of art inspired by pieces of St. Helena History. They have donated them to be auctioned at our event.

Our first event last year was a tremendous success, thanks to our artist participants and all who attended!

Help us raise funds to establish a permanent home for our collection. With such a facility, the public will be able to learn about the history of our area and enjoy some of the amazing historical artifacts that have been so generously donated to us over the past 16 years.

History Becomes Art: A Fundraiser for a home for us, Feb 11, 2017. An afternoon of artisan hors d’oeuvres, wines from Brasswood Estates, live music and an auction of original art by artists interpreting St Helena history, with Fritz Hatton as auctioneer.

Museum for a Day,” May 21, 2016
This year, the bi-annual event honored Hispanic families who have shaped the culture and history of St. Helena. Besides the family displays, attendees were entertained by Ballet Zenoalxochiti dancers and the Gastelum Family Band.

Four-Lecture Series “Revolution & Governance,” Jan-Feb, 2016
Local Historian Jay Greene explored how purposes of governance change because of actions resulting from major shifts in political, social, and religious ideas and beliefs. Greene wove a historical tapestry based on the successes and failures of the American, French, Russian Revolutions and the Spanish Civil War.

Mining Pioneer Grave Monument Dedication, Dec 5, 2015
John Searles, early pioneer and important figure in the discovery and mining of borax in California, was honored over 100 years after his death with the dedication of a monument marking his grave site in St. Helena Cemetery.

“History of Women in Napa Valley,” June, 2015.
Lin Weber presented a talk and slideshow on several local notable women who influenced the development of Napa Valley and, sometimes, the world.

“The Art of Taylor Biggs Lewis,” January, 2015.
The art work of this St. Helena artist was displayed on the library gallery walls during the month of January.

“To the Sundown Sea,” Lectures on Settlement of the West, Jan – April, 2015. In this eight-part series, Jay Greene discussed the pivotal events in our country’s history that made possible the settlement of the vast land spreading all the way to the Pacific.

Benefit for St. Helena Historical Society, Sunday, Nov 9, 2014.
Michael Waterson performed a one man show to a rapt audience at the White Barn, a benefit for the St. Helena Historical Society. Playing the part of various family members, he told the story of the Heath family who, for a time during the 19th century, owned Edge Hill and resided in a Victorian mansion on the property where the White Barn, a former carriage house, is located. Click to watch a video of Oh California! from the performance.

Tour of Inglenook Winery & Vineyards, July 9, 2014.  Guided tour of the winery and vineyards, enabled by the working relationship between winery and historical society researchers.

Holiday Party for members, December 3, 2013
Wine tasting and tour of Flora Springs Winery and wine caves by owner John Komes was followed by a dinner in the historic home on the grounds.

Dedication of Ner Tamid Jewish Community Cemetery, May 26, 2013.
Watch a video of the dedication ceremony of this new cemetery located within St. Helena Cemetery.

“Our First People: Early Habitation in the St. Helena Area,” February 7, 2013
Pacific Legacy archaeologists described their findings from an extensive archaeological dig near the confluence of the Napa River and Sulphur Creek done as part of the Napa Valley Flood Control Project.  See the presentation on video: St. Helena’s First People.

“Murder & Mayhem in the Napa Valley,” January 8, 2013
Todd Shulman, Napa detective and founder of the Napa Police Historical Society, presented a slide show and lecture about researching the frontier justice, lawlessness and cold cases that still haunt the Napa Valley.

“Lost and Found: the Legacy of the USS Lagarto”, November 7, 2012
This Veterans Day program honored submariners and showed a documentary film about the USS Lagarto.  This is the story of a submarine, under the command of Frank Latta, a St. Helenan, lost at sea during WWII and discovered by deep-sea divers almost 60 years later.

Games Boys Play: Historical Sports at SH High School, September 12, 2012
Jim Hunt, class of ’62, shared his research of boys football, baseball and basketball, between 1908 and 1968, at St. Helena High School.  You can read the text of his talk on the Research Library page.

100th Anniversary of Vintage Hall
& Grand Opening of High School Voc Ed Complex, August 1, 2012
After dedication ceremonies and a celebration of the 100th anniversary of Vintage Hall, guests enjoyed self-guided tours of the new Vocational Education Complex and food prepared in the new culinary facility.  Alumni and other guests met in Vintage Hall to share memories.   See our Facebook page for photos.

“Pollyanna in the Park” June 15, 2012
Dozens of families came to Lyman Park to enjoy a free screening of Walt Disney’s Pollyanna, staring Haley Mills.  Many of the scenes from the movie were filmed in and around St. Helena.  Mariam Hansen, St. Helena Historical Society research director,  introduced the film and shared stories of the filming.

War Memorial Dedication, May 28, 2012
Several hundred people attended the unveiling and dedication of a new monument in honor of St. Helena-area service men who died during wartime, from World War I to the present. American Legion Post 199 raised funds to create the 8 foot long black granite monument upon which 28 names are engraved.  The program included a Color Guard and Rifle Squad processional and Raising of the Colors, singing of the Star-Spangled Banner by Lisa Wicker, the welcome and dedication of the monument by Post 199 Commander Clark Hallam, opening prayers and more patriotic songs, by Chaplain Sean Collins and the St. Helena Community Church Choir respectively.  Speakers included Mayor Del Britton, Congressman Mike Thompson and Ted Muhlner of the Navy SEAL Foundation.   The program and biographies of the 28 service men were done by a team of St. Helena Historical Society researchers led by research director, Mariam Hansen.  Read more about the event in the St. Helena Star  or see photos on Facebook.

Andrew Jackson Grayson, the “Audubon of the West,” February 14, 2012
A lecture on this talented naturalist and his amazing wife, Frances Grayson Crane.